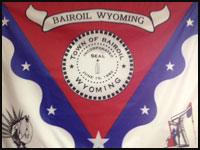 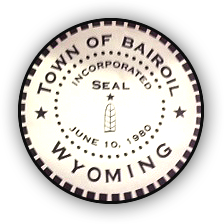 Trencher Park
Trencher Park is a piece of land owned by the Town of Bairoil where the Old Town Hall building is located. The town plans on rehabbing the old town hall, which will have offices and meeting rooms and our Town of Bairoil museum inside. The surrounding area outside will have landscaped grounds, asphalted parking spaces, and picnic tables and benches. The whole area will be fenced with a 5' tall wrought iron fence. The Trenching machine will be displayed on the concrete slab located on the South side of the Old Town Hall.

Buckeye Traction Ditching Machine #3745
It is believed this Buckeye ditching machine was built around 1920. It was manufactured in Findlay, Ohio. The original Buckeye machines were steam driven. This particular machine was powered by gasoline. They were developed mainly for agricultural use, and revolutionized the process of draining land in parts of Ohio, and played an important role in the area's agricultural history. Later they were used during WWII. This machine was purchased by Burt Landon, a company welder for Stanolind Oil Company and was used to dig ditches all over Wyoming (Yellowstone Park), Montana and Colorado. The machine was hauled to Bairoil from Midwest, Wyoming in the late 1930's and was used to dig most ditches for flow lines as well as water, sewer, and gas lines for South Camp. Kenneth Osborne, Sr. operated the machine off and on for many years. The last ditch it dug was from West Wertz #1 to West Wertz #2 in the early 1960's, and was then replaced by back hoes and track hoes. It has sat in the Wertz field since the 1960's. The machine was given to Kenneth Osborne, Jr. by the Landon family. Mr. Osborne gave it to the Town of Bairoil to be displayed as a piece of Bairoil's history. It was moved to its present location by Bartlett Oilfield Service on March 30, 2014. (Buckeye ditchers are still being manufactured in 2014 by H&S Company, Inc. of Celina, Ohio).